The Gathering is finished 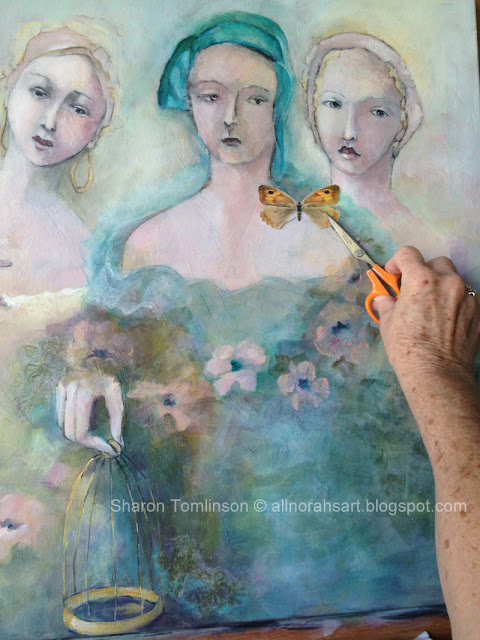 There is so much that I want to share about this painting. You know, mostly my thoughts while painting. The thing is, at this finishing stage, I find myself without words. And I think you probably aren't interested anyway.
Maybe another day.
♥
I hope you enjoyed the series of the last 4 post leading up to this one.
♥

This is the fourth post in this tutorial series. You can scroll down to the beginning if you missed it. 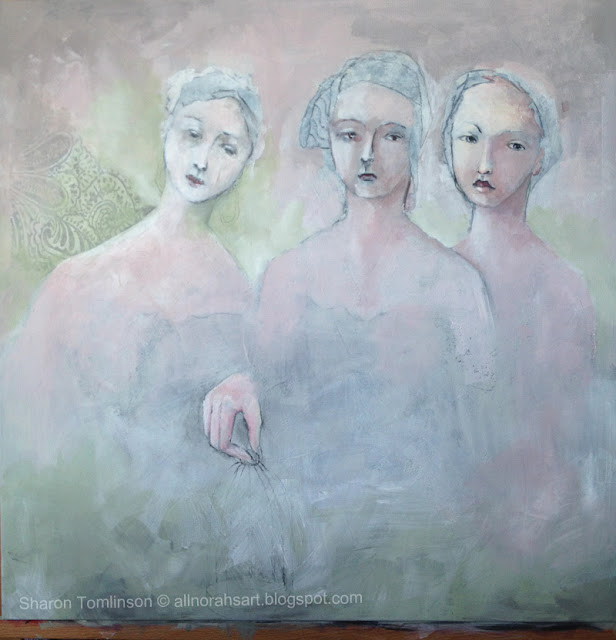 You may remember that when I get into the flow of the painting and it is just me and her, I forget to take photos. 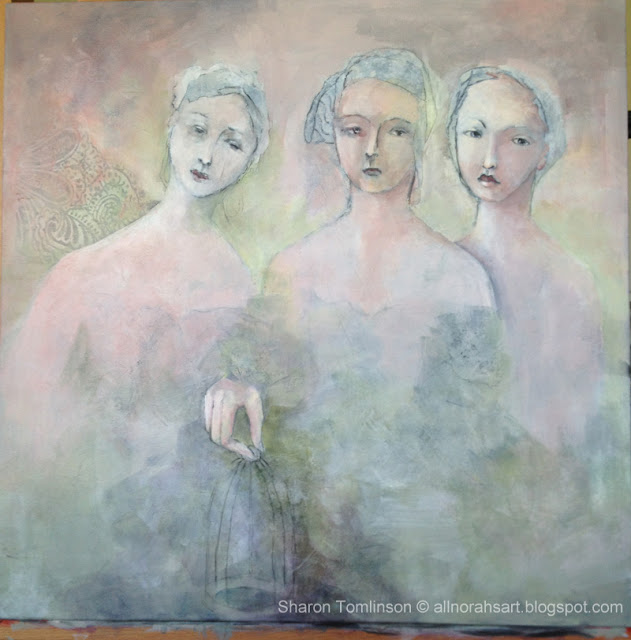 So, I thought today I will share the painting of two hands showing how they progressed.

My preliminary sketches showed more of the body and the hands were extended. I changed because I wanted the heads to be larger on the canvas. The challenge then became how to add hands in a way that would read believable (without painting the arms).

So far so good, I think.
I'm not yet sure if I will add a third hand.
I'm thinking about it.
I will confess that with each hand that I add to a painting, I feel a little trepidation.
Then when I go ahead and go-for-it, I am elated.

I'm headed to the easel now and hope to finish this one in today's session.

You might like to go to this post, Do You Remember the Sisters? for the beginning of this tutorial series. Then, The Cello Sketch for the next installment. Or just scroll down.

I was very anxious to see how the technique with permanent marker and alcohol would work on canvas. 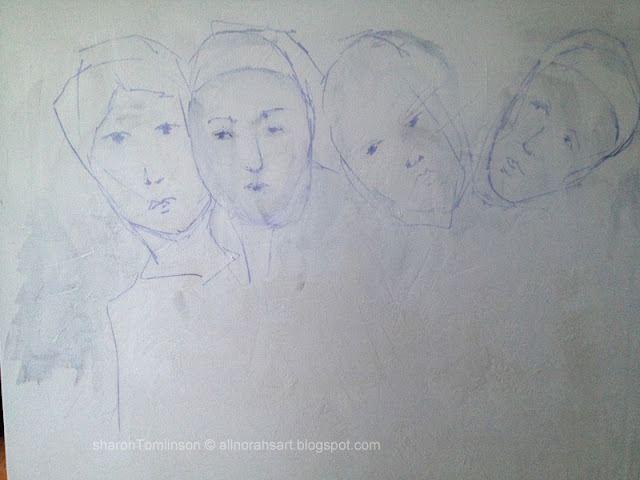 But first, I wanted texture or rather I didn't want much canvas texture. I used Golden's Light Molding Paste #03575 to prep the canvas, as well as, multiple coats of acrylic, and gesso.

After I did my quick Sharpie permanent ink sketch (above), I heard that little voice that said, "this is not going to work" and "why did you need to try it anyway?"

I knew immediately (when the light bulb when on) that since I had prepped the canvas with acrylic products, the alcohol would start to dissolve those products instead of moving the ink around on top as it did on the cellophane.

That is exactly what happened.
As if that wasn't bad enough, I knew the Sharpie marker would bleed back to the top. However, I thought I was in control of where and how much would come through.
That was the part I was excited about.

Anyway, fighting failure, I painted layers and layers of paint and gesso, I eventually painted black gesso over it and left it for several days before I once again painted a layer of grey acrylic just to see if the sharpie marks were coming back.

They didn't!
Why?
By this time, I knew I wanted to use the girls from the cello sketch because I loved their personality.
And since this was inspired by the "sisters" from long ago, I decided to use the transfer technique just as I did the series long ago. 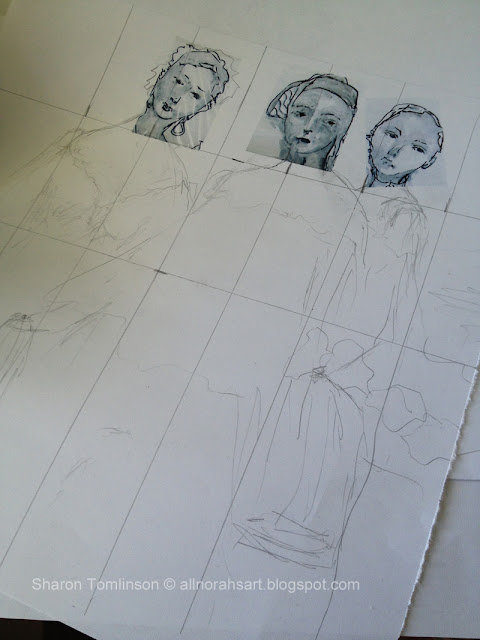 I scanned the cellophane sketch, printed and cut apart the faces. Above pic shows the beginning of another preliminary on paper. This was to get the placement and scale using only three of the girls. 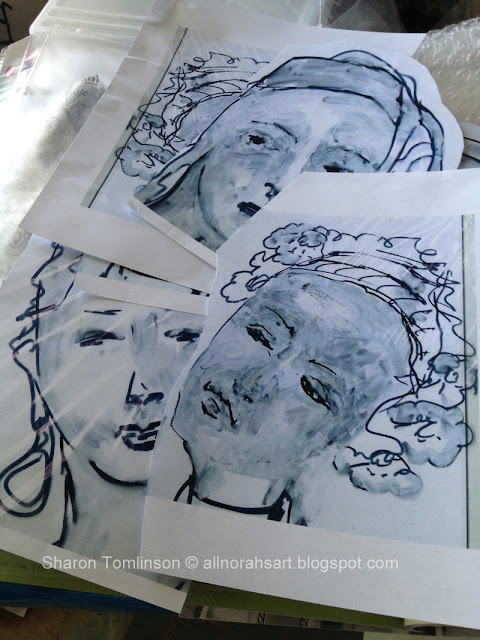 Once I decided which three girls, I had to flip the images horizontally and print a copy of the size I needed. 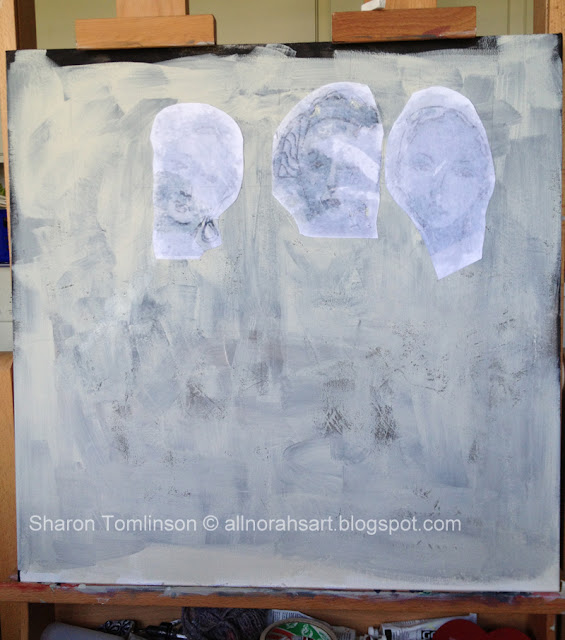 I used my laser printer but ink jet works just fine too. I brushed the print with Golden Regular Gel (Semi-Gloss) #3040 and placed the faces in position ink side down. Then I use a stiff edge like a credit card and squeegee over them to make good contact with the canvas.  After is sets for a little while, I use a slightly damp cloth and rub over the print. That is the stage above where the image begins to show through.
Using my finger, I gently rub off the paper layers....slowly.....but surely until... 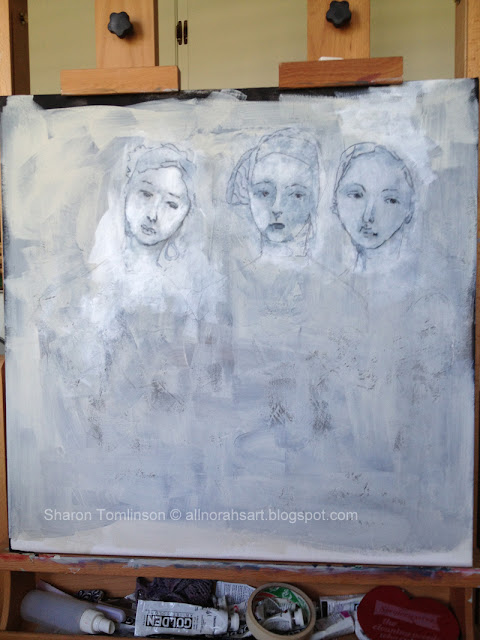 ...all the paper is gone. If a little paper fuzzy remains, I lightly sand over it before sealing the transfer with Golden Matte Medium #3530. In the photo above I have started painting with white paint.

One more thing, before sealing, I like to work the edges of the transfer a bit with the damp cloth and my finger to blend the hump of medium with the canvas. This is not necessary. I just don't like seeing the edge. 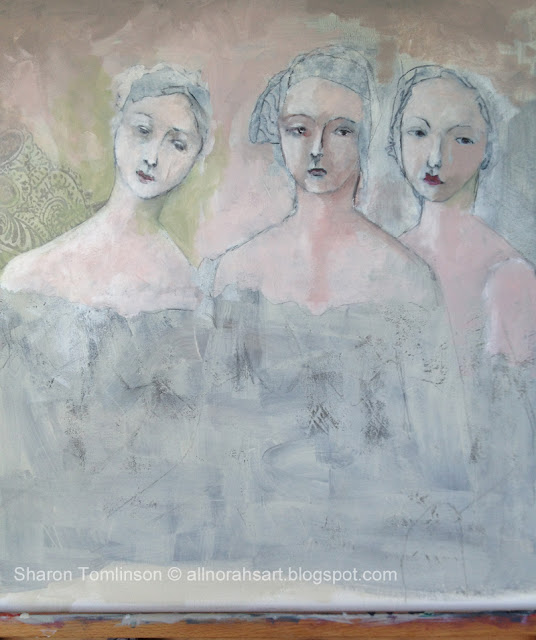 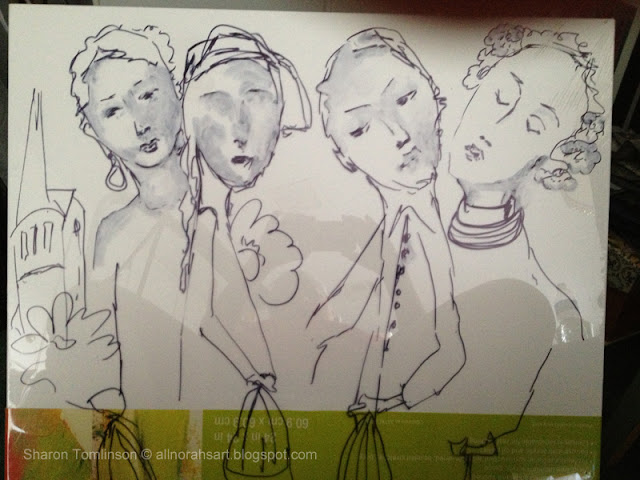 I don't usually perfect the preliminary sketch...
but
I was on a long phone call and this was sitting right in front of me...
Also, nearby was my little bottle of alcohol and a cotton swab.
My sketch was made with a Sharpie permanent marker on the cellophane wrapper. 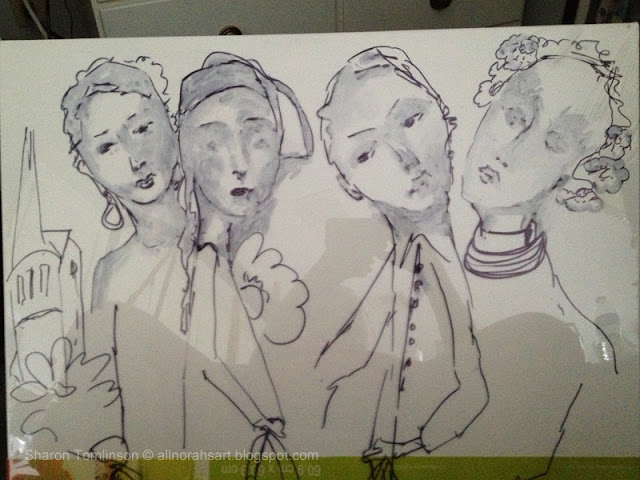 I was delighted with how the alcohol moved around the ink...
much like you would manipulate charcoal on canvas. 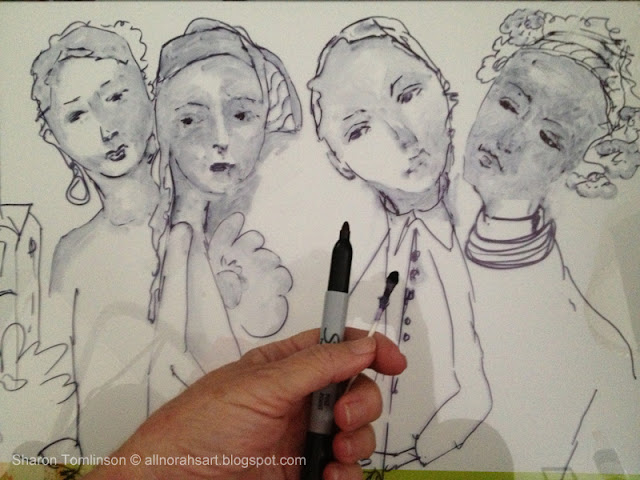 I kept playing ...
just because I could!

I'm off to paint now.
♥
Posted by Sharon Tomlinson 4 comments:

Do You Remember the Sisters 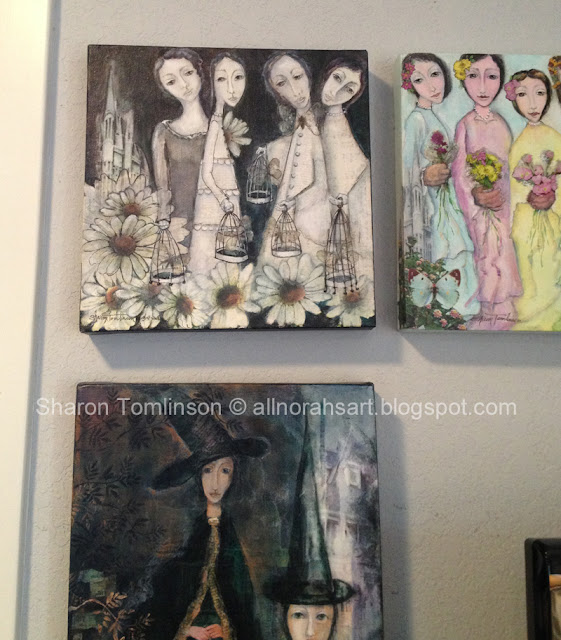 Do You remember the sisters and their reunions?
Well, again I am inspired with one of my "sister" paintings.

Meeting in the Moon Garden is a favorite and it hangs just above my big TV in the chair zone where I catch myself staring at it. A lot.
The painting is my result of a "Black and White" challenge by Somerset Studio.

I love the sisters and their stories and once again I am inspired to paint a new version of an old painting.

It is well underway and I want to share with you a bit of the
work-in-progress. 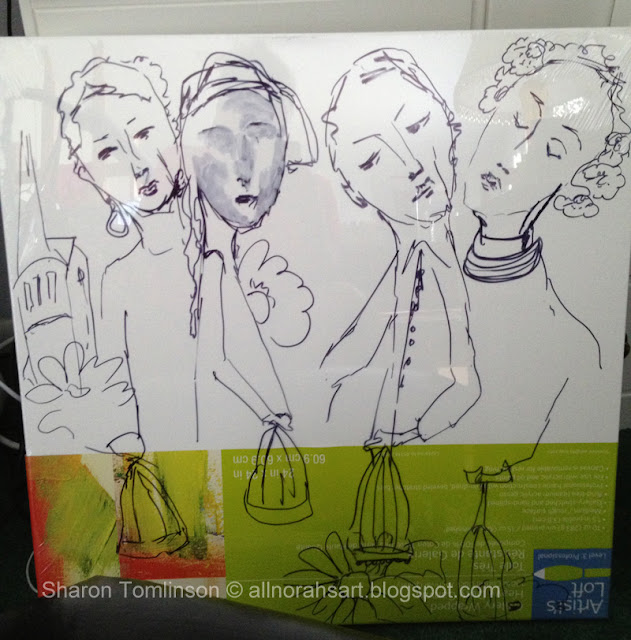 Starting with my preliminary sketch.

The original painting was a 12 x 12 and I was inspried to use the square format since I happen to have a 24 x 24 on hand.
My sketch is on the cellophane wrapping of the canvas.

This is a fun way to start.
And is probably my way of easing into the painting.

So that is enough for today.
I'll bring more for you tomorrow.

If you haven't been inspired to paint another story from one of your paintings, I recommend it. 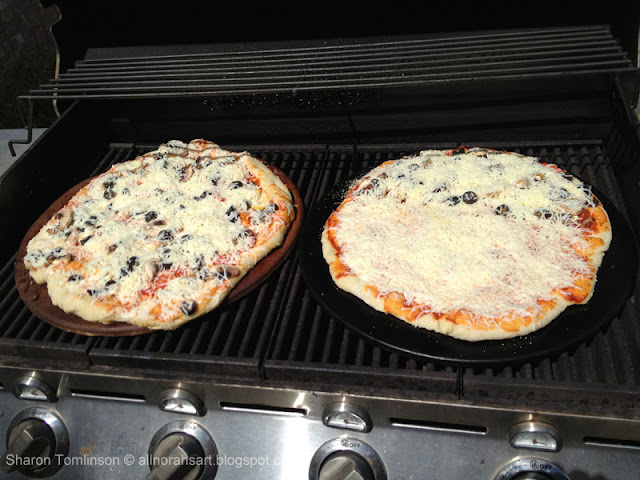 Homemade pizza on the grill.....
...not quiet ready.
Posted by Sharon Tomlinson 3 comments: