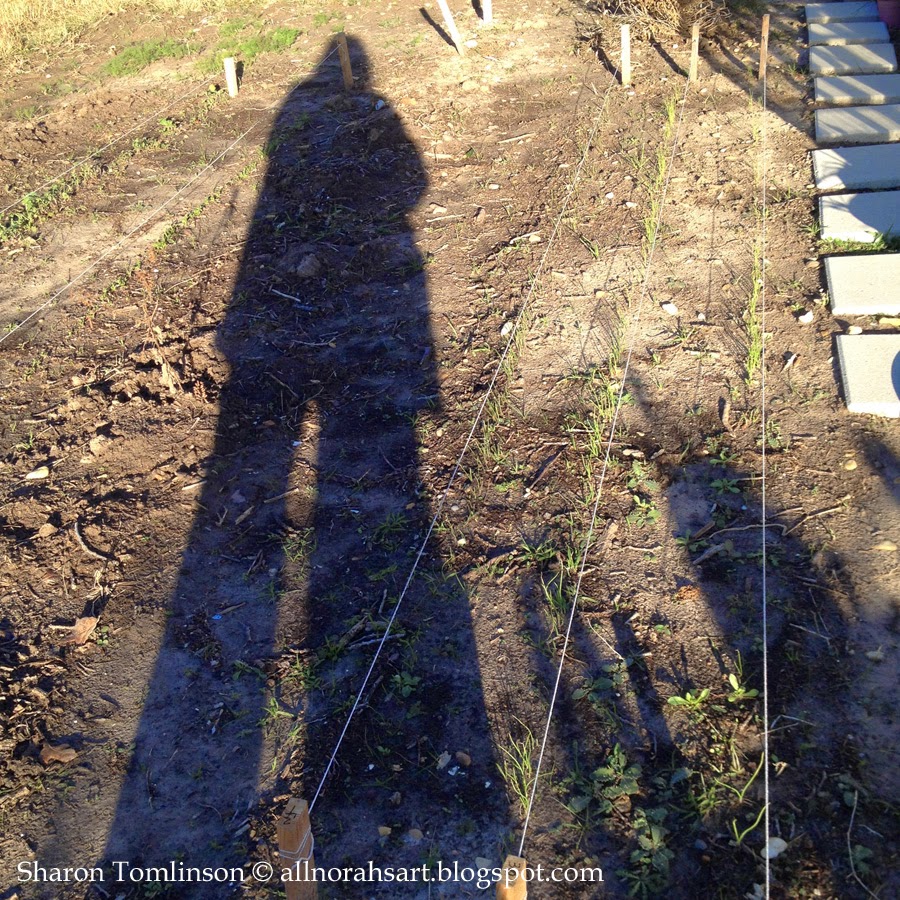 This is me this morning with bright sunshine and temps warming.
I planted three rows of onions on October 15th.
A sweet onion known as Texas Grano 1015Y, meaning you should plant them on October 15th.
I did.
The middle row is Red Burgundy and seems to have been the best germinator.
And a row of White Bermuda. 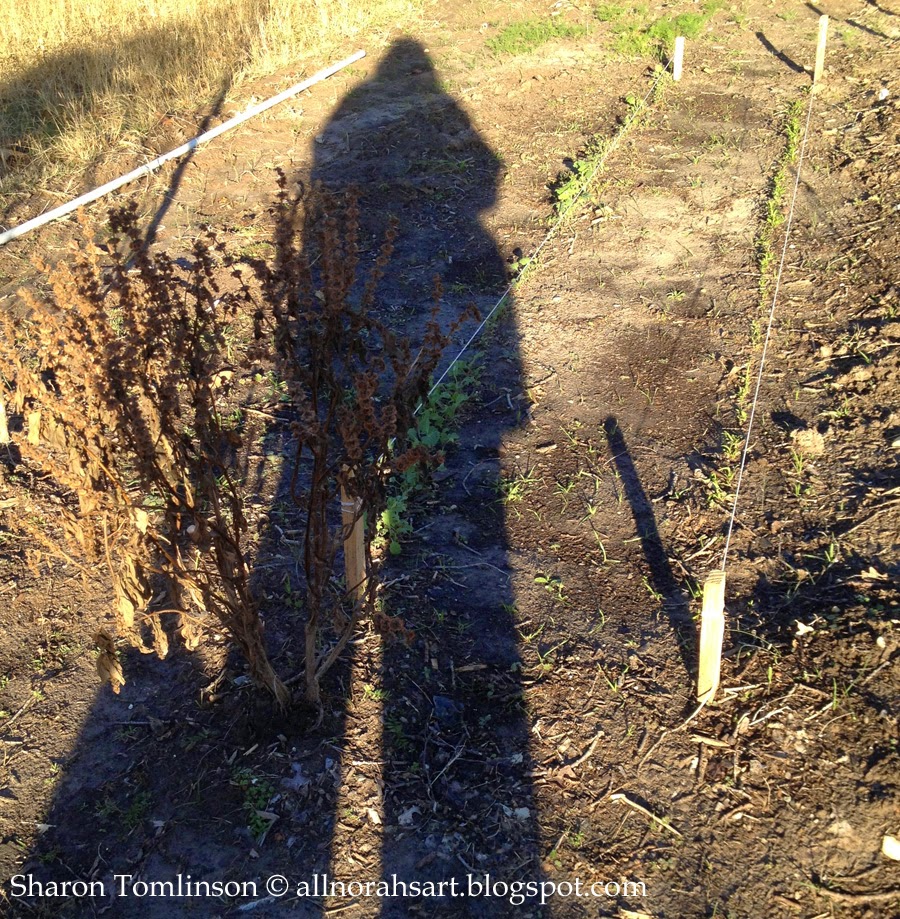 This is me this morning showing a row of collards and a row of spinach.
Did you know that spinach seeds do not keep?
In other words, I had to buy new seeds and replant the spinach after the first planting ..... did nothing. 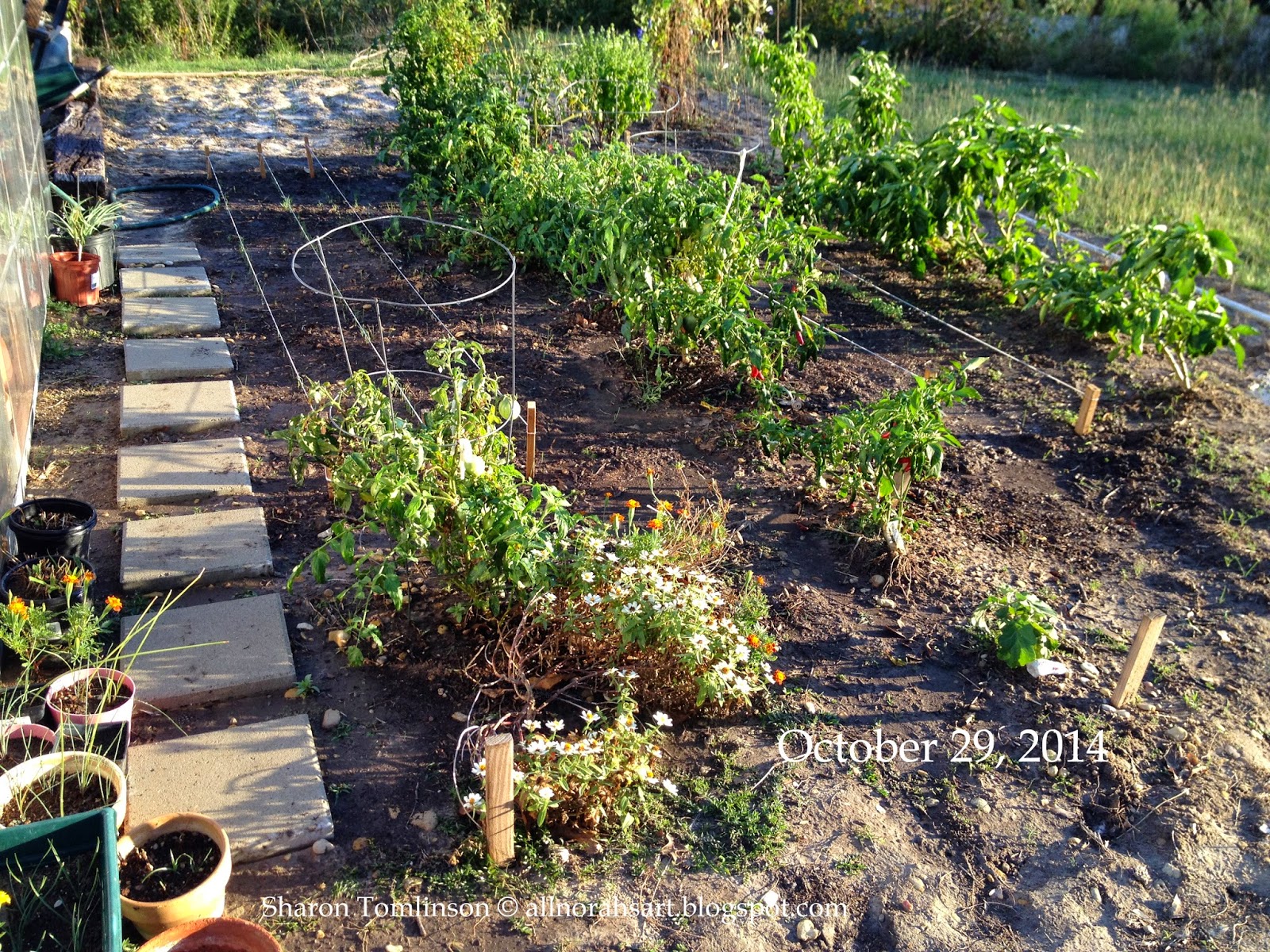 This is the garden on October 29th  with the tomatoes and peppers still going full force. 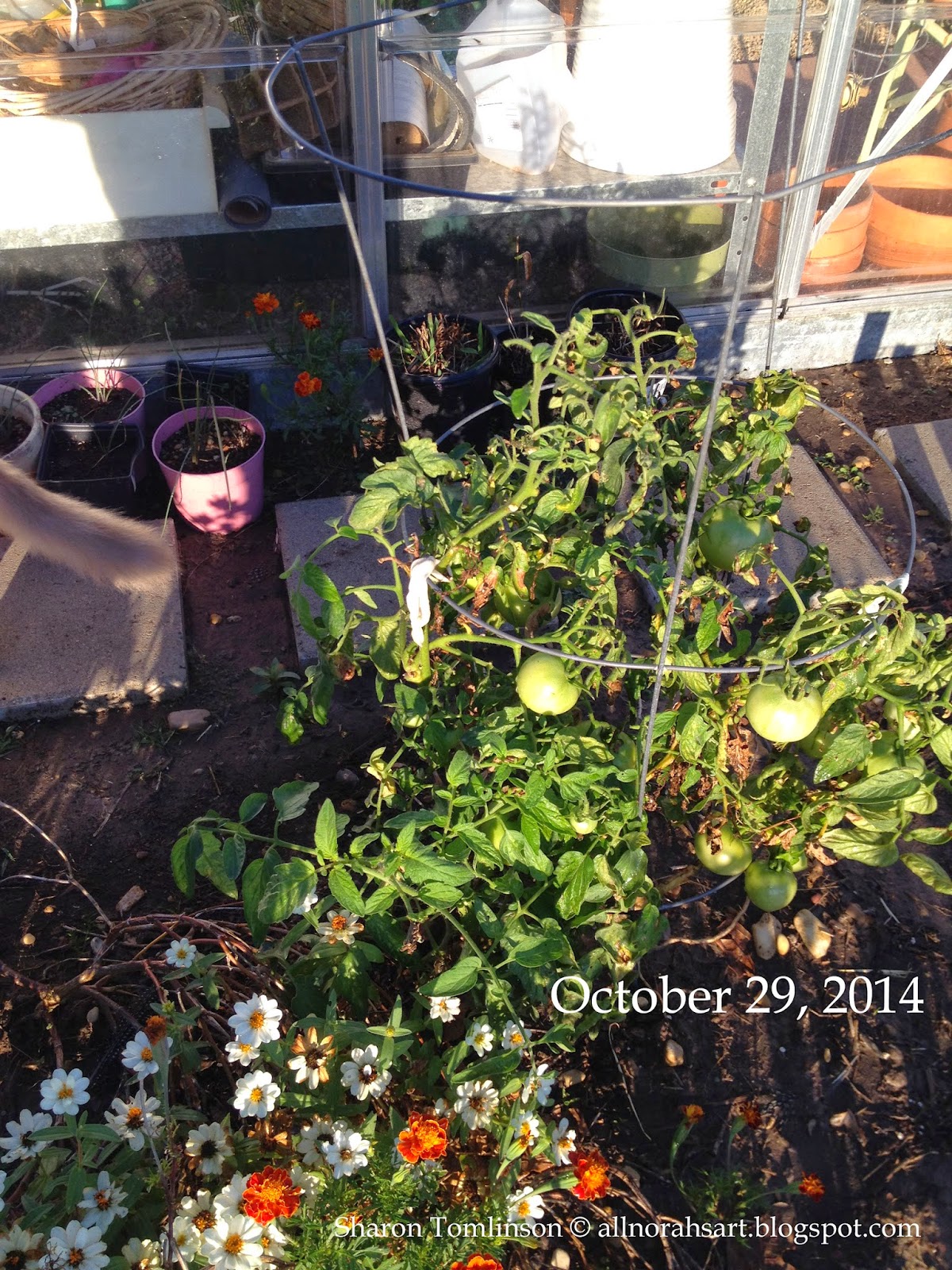 Not all are visible but this plant had 18 tomatoes on it and was still blooming. 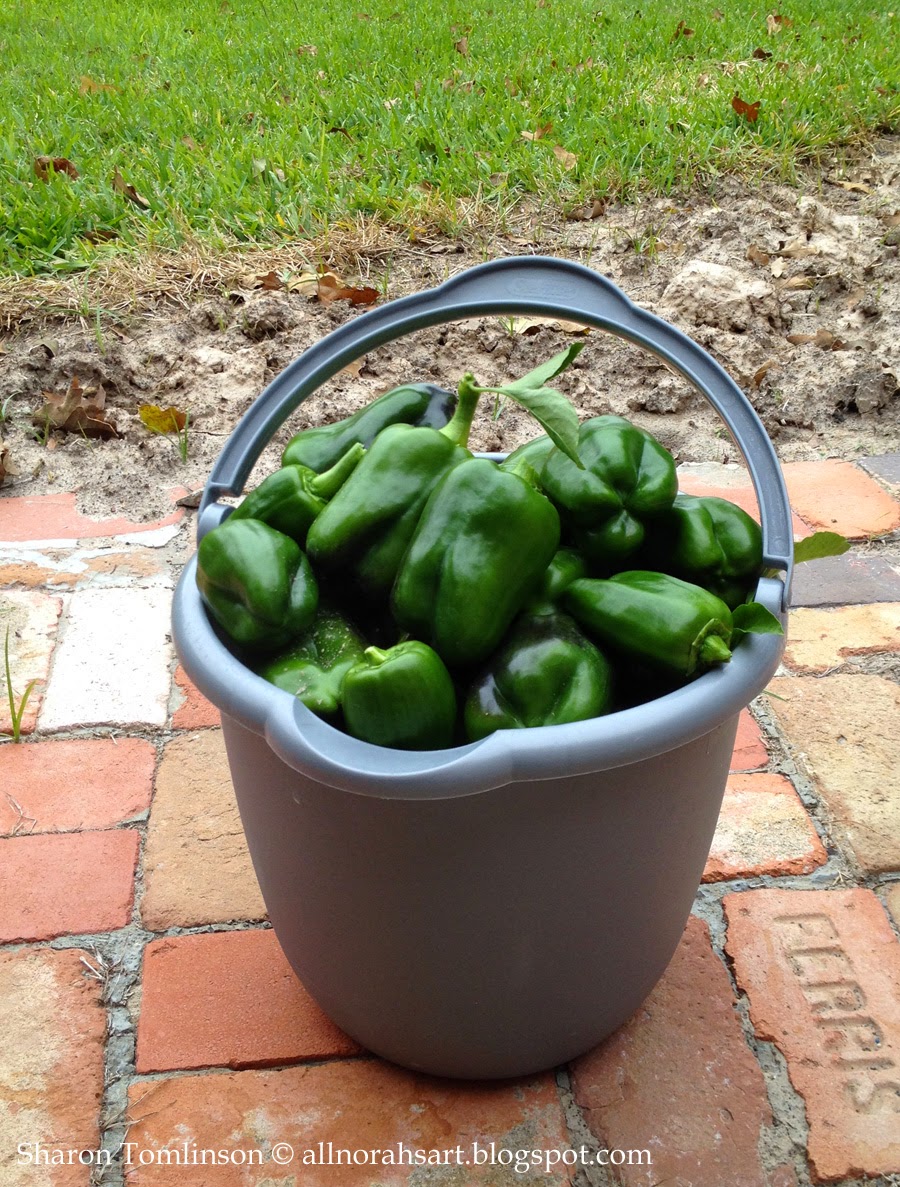 Eventually I had to shut them down and collect the bounty before hard freeze. 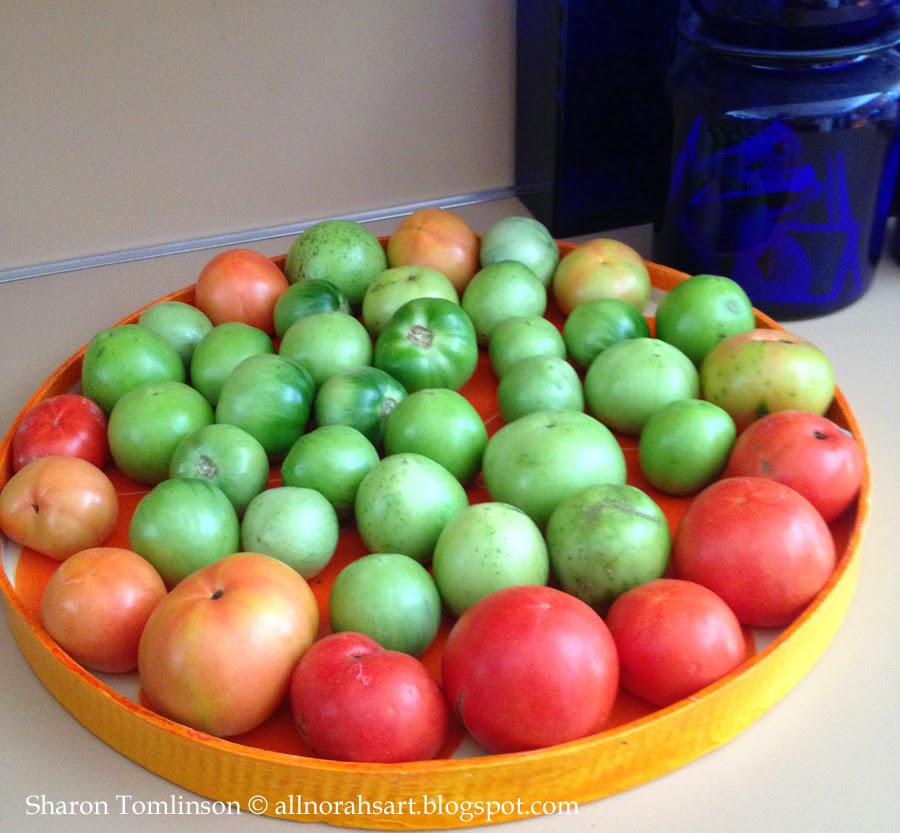 Early in November, I happened on an article about green tomatoes.
I knew green tomatoes will ripen inside because I did that early in the summer when a limb broke with green tomatoes.
But I did not know that after the night temperature gets down to 50ºF and lower for several days that you should pick the produce and bring them inside to ripen.
Therefore, you can't necessarily leave them until a predicted freeze which was my plan.
I harvested the green tomatoes and peppers on November 11th.
Sure enough, they began to turn.
Each day I pulled the newly turning tomato to the rim side....well just because.
I am so glad for this tomato lesson because, I have fresh homegrown garden tomatoes for Thanksgiving. 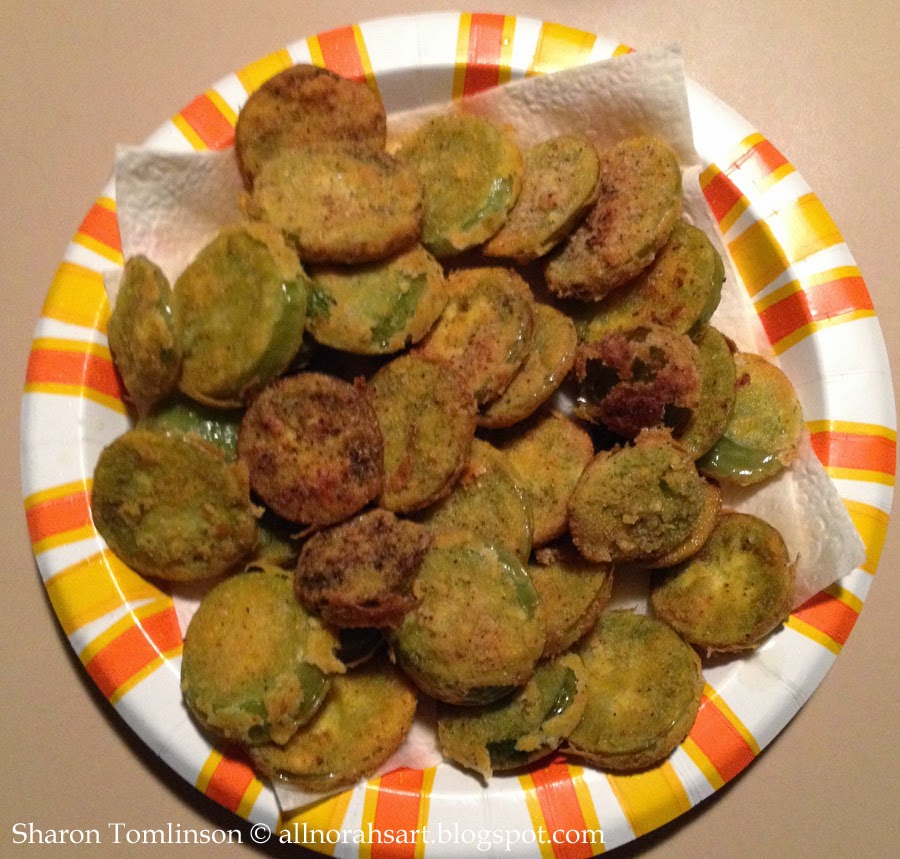 Of course I also made fried green tomatoes.
My first time.
Delish!
Here's my recipie.
After coating them with yellow mustard (yep the kind you put on your hotdog), then I toss them in a plastic bag with Zatarain's Seasoned Fish Fri.
Fryed in oil.
Try it.
Cooks Tip: I coat them by squirting about 2T of mustard in a plastic bag. Then I smush the mustard around to coat the inside of the plastic bag. Then, dump the sliced tomatoes in the bag and smush them around to coat. Add the Fish Fri mix and shake the bag. I do the same thing when something needs to be coated with olive oil. 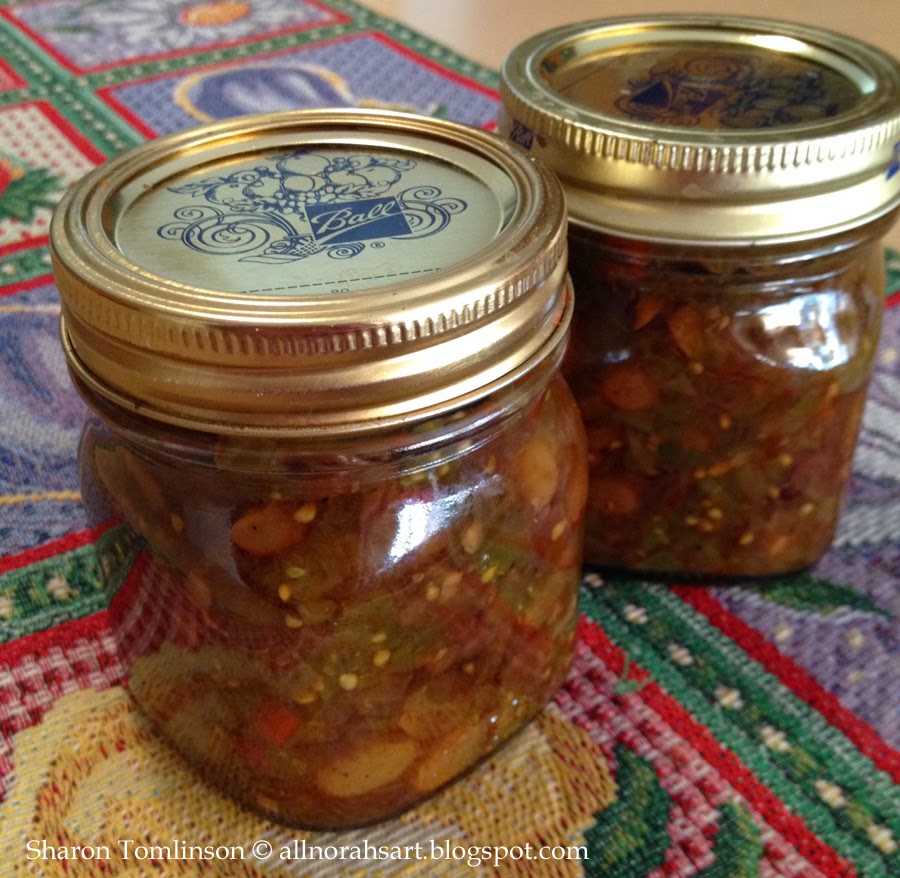 The other thing I learned in the tomato article is, the small green tomatoes will not rippen because they haven't matured enough to do so.
This to-ripe or not-to-ripe all has to do with what's going on inside the growing fruit.

But you can make green tomato chutney with them.
I did. 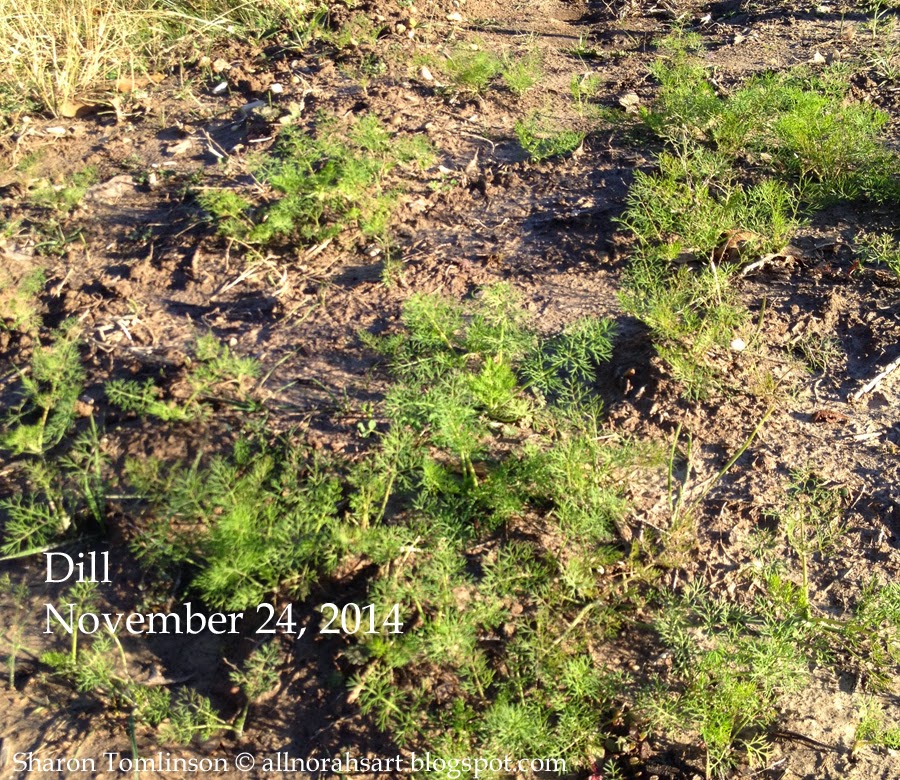 Now here is the biggest surprise of all.
Dill.
Remember I left the seed pods on the dill so they would self-seed in the spring.
I didn't expect them to germinate in the fall.
But the surprise is, we have had several days of freezing and below temperature and here is the dill today.
Unfazed.

You can see the dill in the top two photos too.
First, to the left of her head.
Then, to the right of her head.

That's it for the garden this year!
♥
Posted by Sharon Tomlinson 1 comment:

Email ThisBlogThis!Share to TwitterShare to FacebookShare to Pinterest
Labels: Home and Garden, Me

Who are These People

Who are these people? 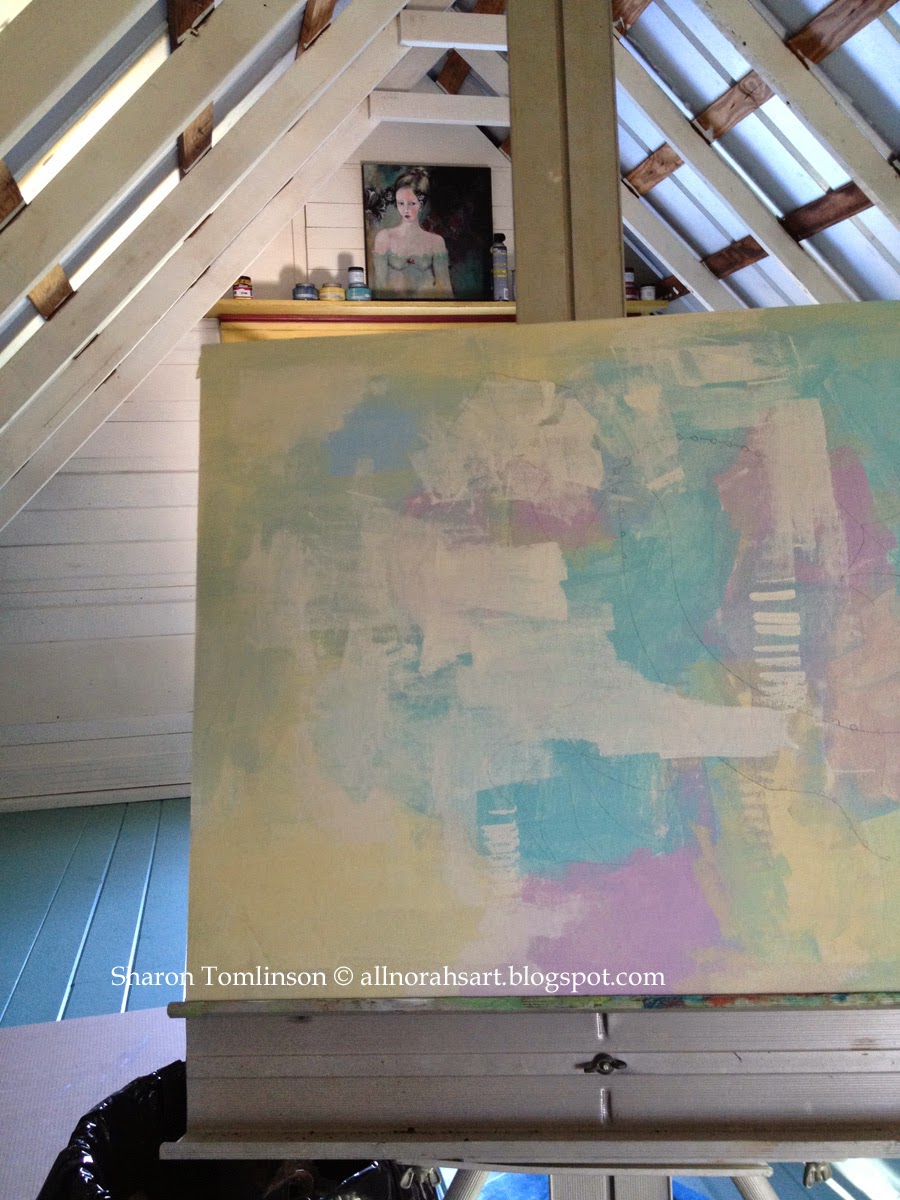 That Sunday back in October when I initiated the Attic Studio and documented the event on Instagram with the above photo was a beginning.

It was a beginning of a huge attic studio project; the details of which I will save for another post.

Not until I posted it on Instagram did I see the haunting white face right there near the middle.
Do you see him?

I got pretty excited but this is when we were having big rain and wind storms and I didn't go back over for a few days.
All the time, I would pull up the photo and wonder about who he was and how I would paint him.
I really did get myself worked up about the process.

At last we had a clear day and I rushed over to look at the face in-real-life to see how in the world I had overlooked him.

In shock, I remembered the quick documentary photo shot was just a moment in time.
I had totally forgotten that in the zone and flow of the day in the attic studio, I kept pushing cheap pastel craft paint around with a cheap foam brush on this big piece of cardboard.
And he was gone!

I was back to no inspiration with this piece which was my starting place when I first sat down at the easel in the attic back in October. 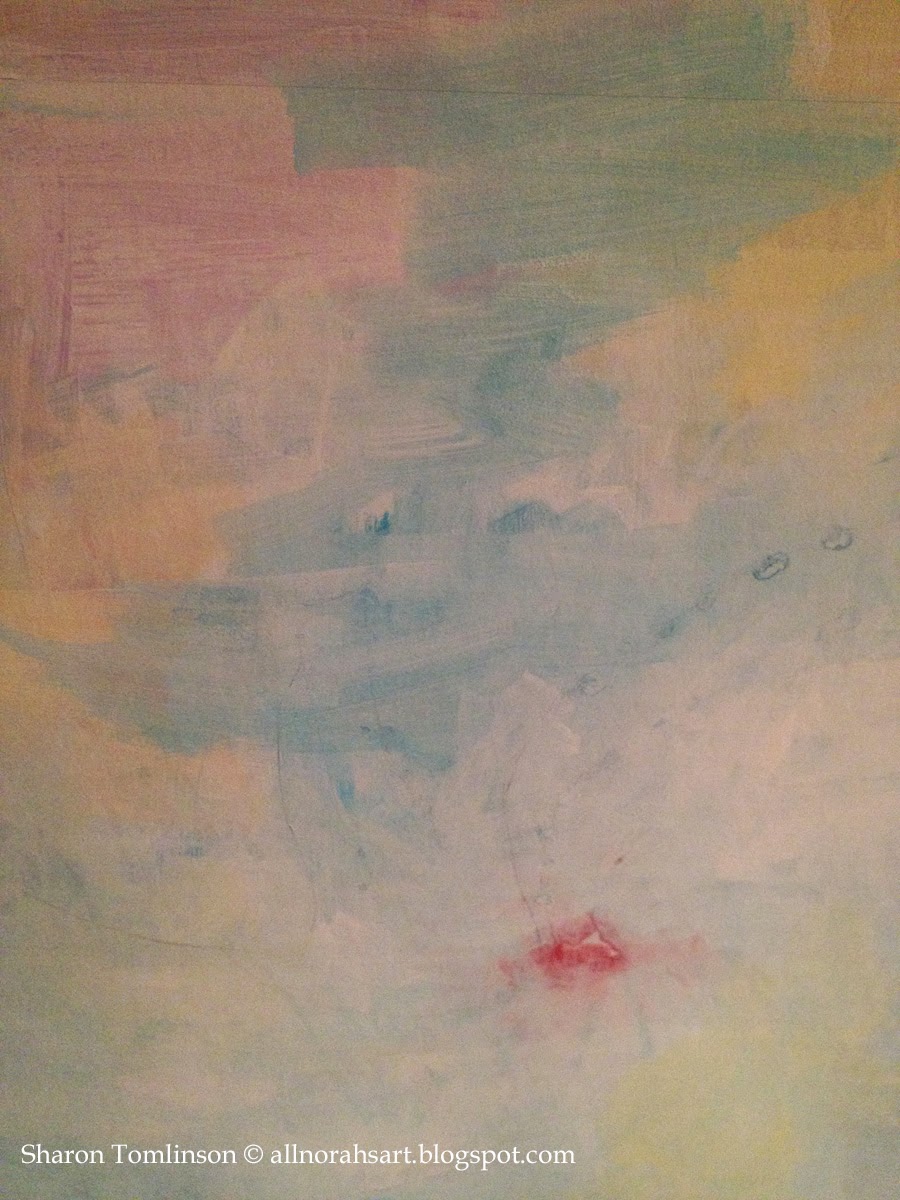 As stupid as it sounds, I grieved about the loss of this phantom (a physical manifestation of the soul or spirit of a deceased person) face.

Time passed and I finally was ready to face the project again.
Due to the cold, I decided to fetch the cardboard and paint here in my warm home studio. 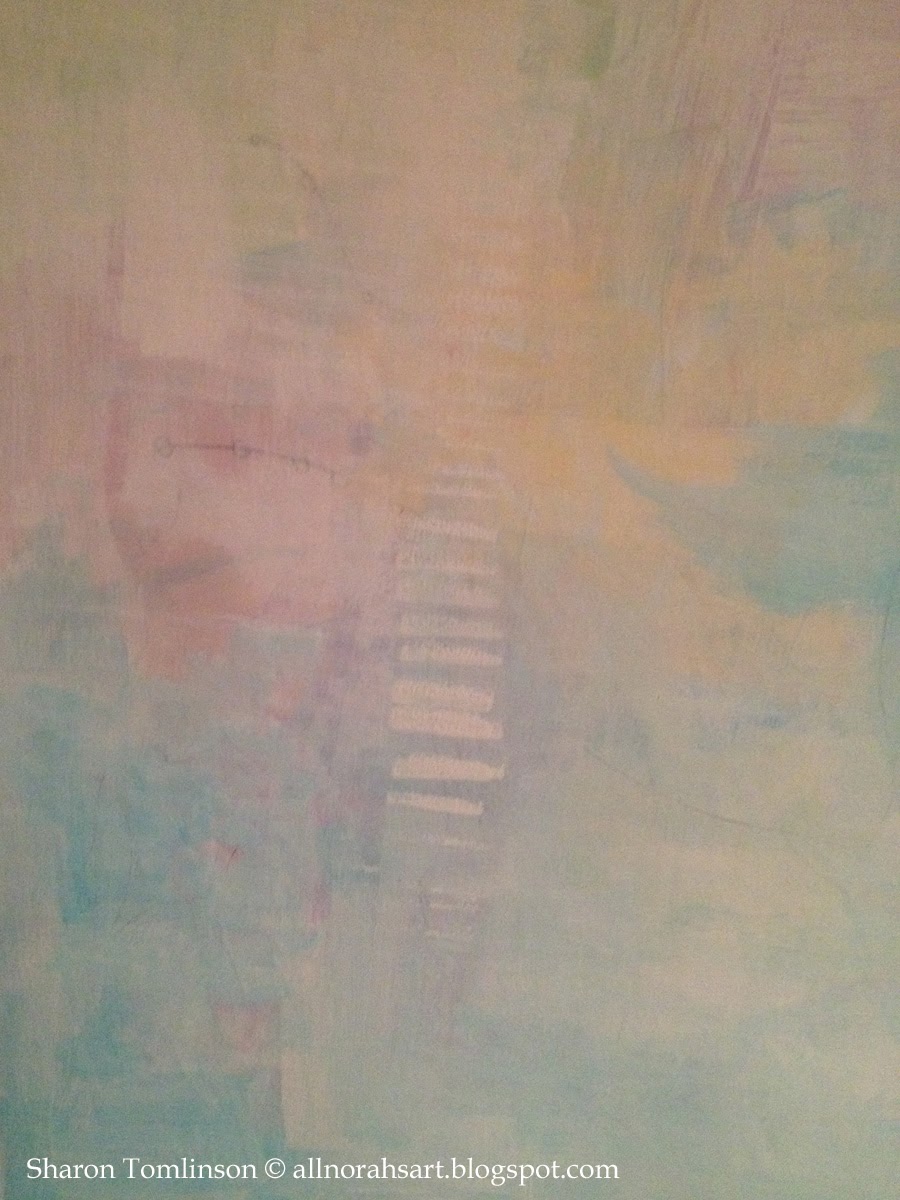 I propped it up in front of me while in the cozy chair zone just thinking about what I would do next.

He was sure enough gone.
So I flipped it over with the up side down
and
lo and behold!
There are people on it!
I would probably never have looked for them were it not for him. 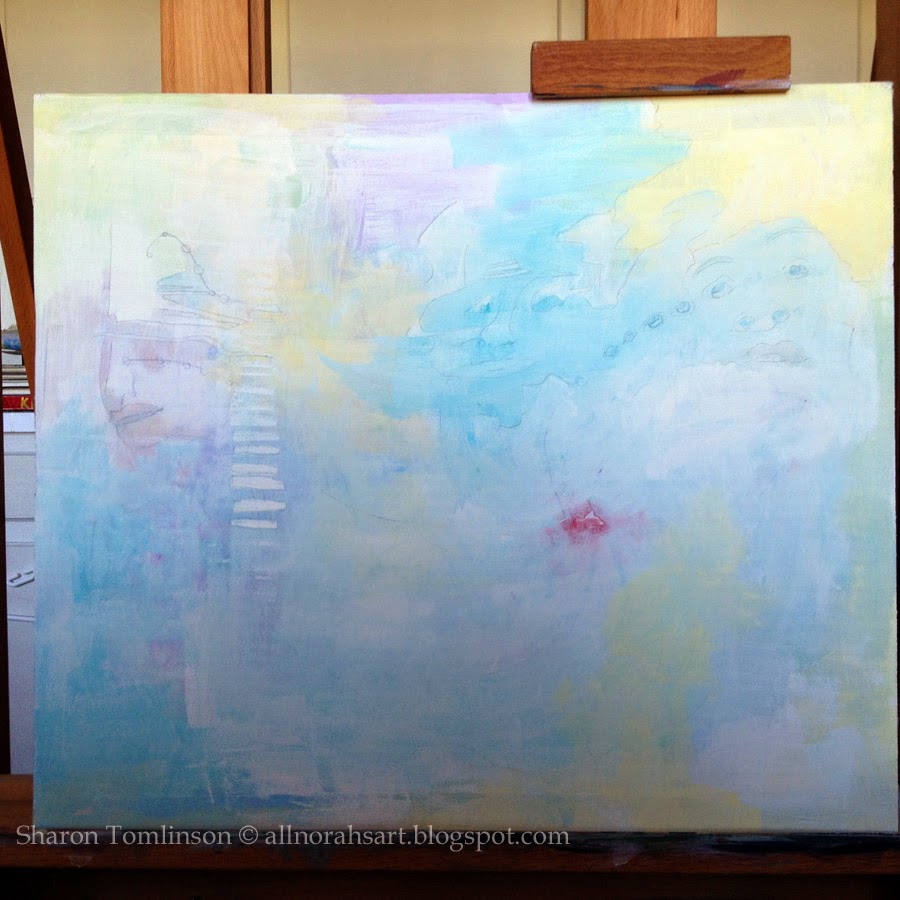 Here they are after I lightly penciled around the shapes that clearly were people. 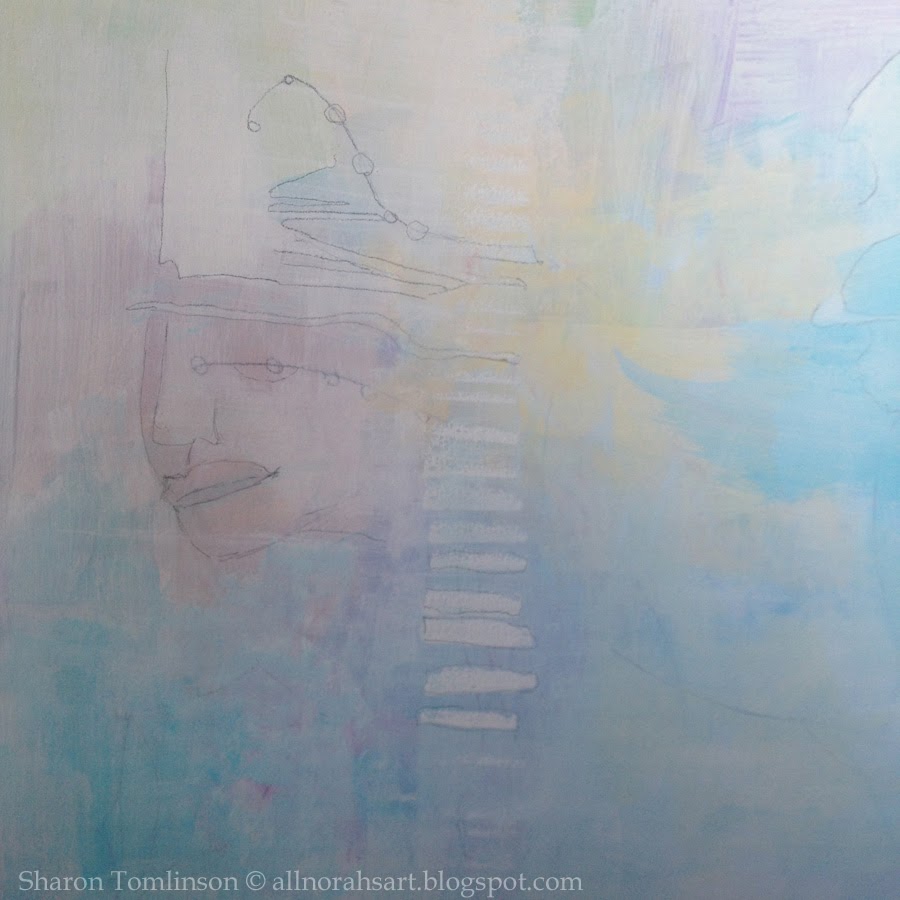 Sometimes it's not about pretty faces.
My technique is to capture what I see with minimum paint. 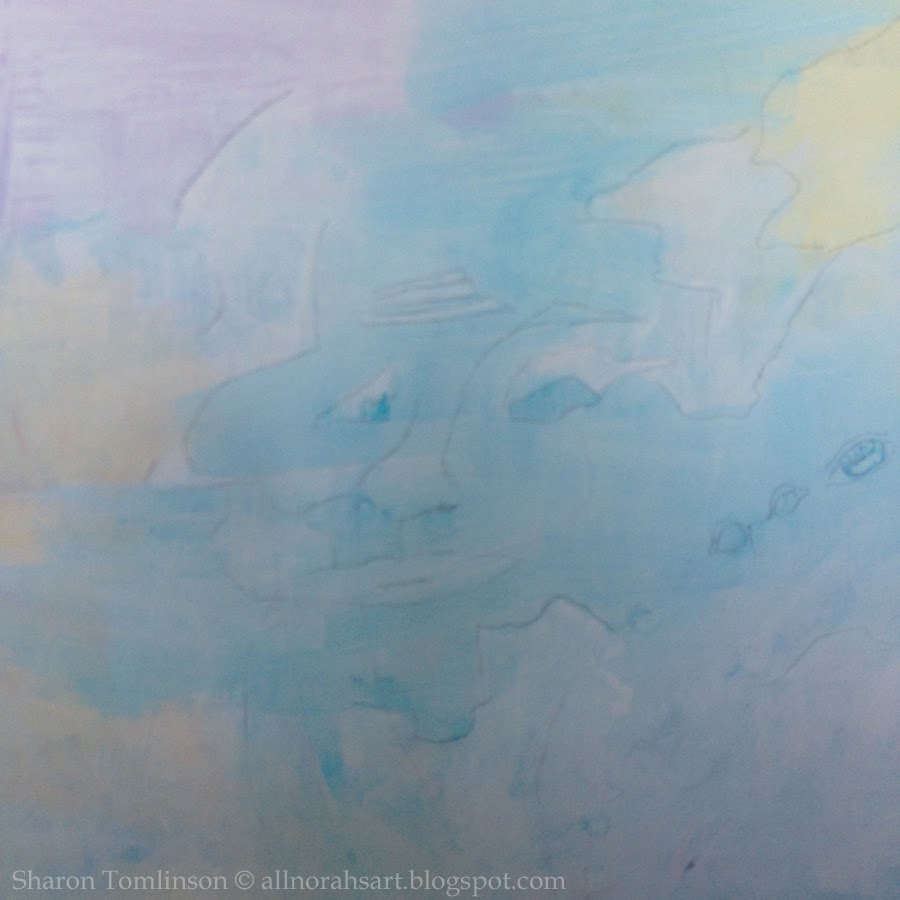 This is not the first time A Group Of Strangers has shown up while I'm painting. 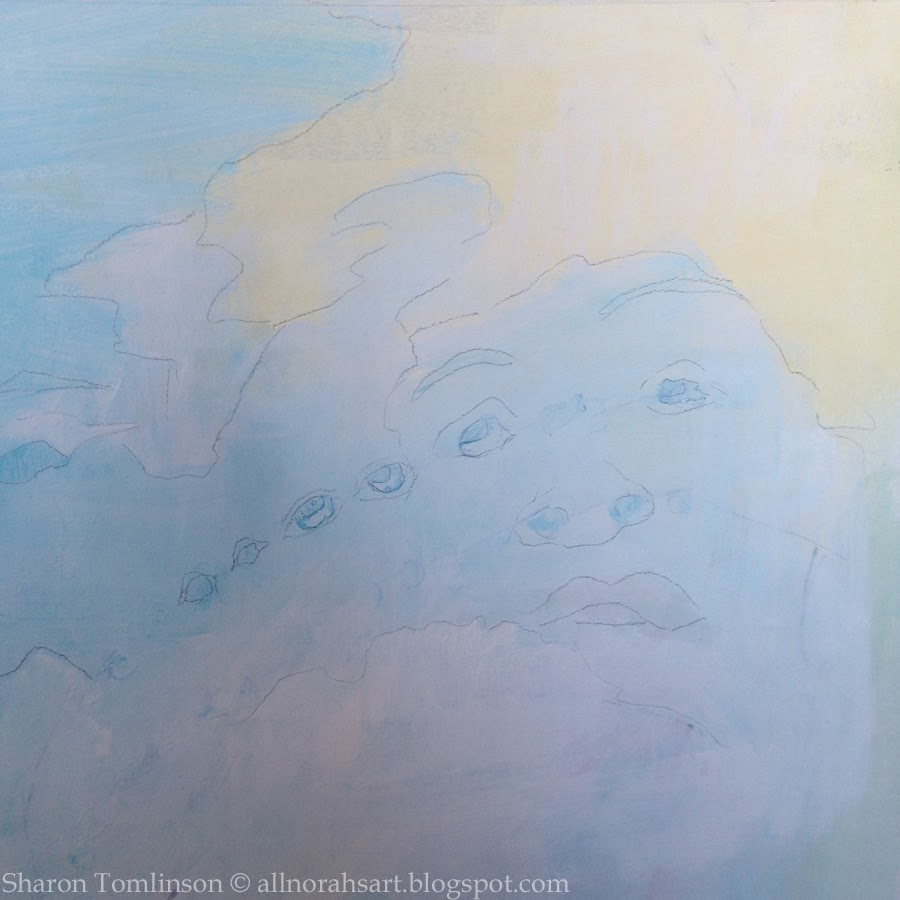 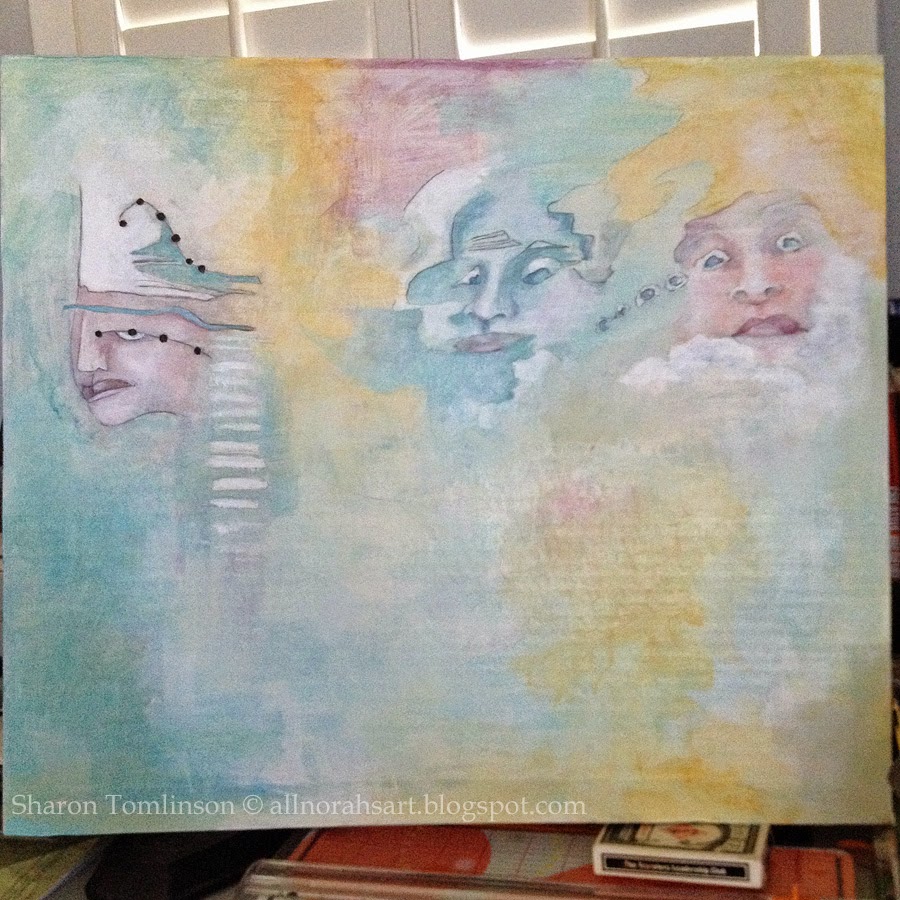 On that Sunday back in October when I started this project, I prepped and pushed paint around on several more cardboards.
Yep, more people.
♥
Posted by Sharon Tomlinson 7 comments: