I Lost My Way 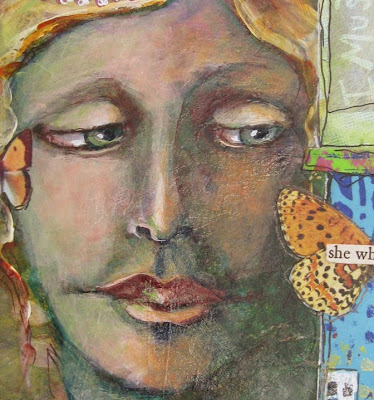 Sometimes, it is just plain hard to find a way back to blogging.
I have a new schedule of things-to-do for now and I am beginning to adjust.
But adjusting doesn't seem to keep me from crashing in the chair at night instead of creating art or blog posts. 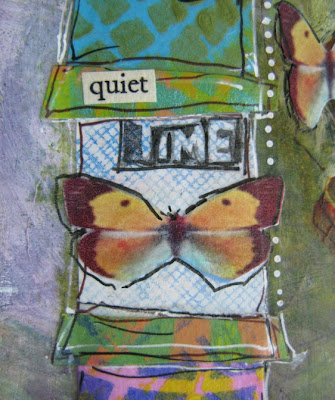 I tell you this office has been so quite this week. Dear husband hasn't left the bedroom since he had surgery last Thursday and we came home on Saturday.
That means I'm in charge big time around here.
I'm in charge of this office....that's probably nothing new but I do miss his company.
I'm in charge of what and when he eats.....that's probably nothing new either but I do have to serve him. When I say he hasn't left the bedroom, I really mean he hasn't left the bedroom. He is being extra careful and is not to put any weight on his left leg at all for 6 weeks. He is in a straight cast type splint and can hop on one foot on crutches.
I mean to ask him but I really don't imagine that he played much hop-scotch as a kid because he is not too good hopping on one foot.
He will go next Wednesday to have staples removed and then maybe he will venture out of the bedroom. 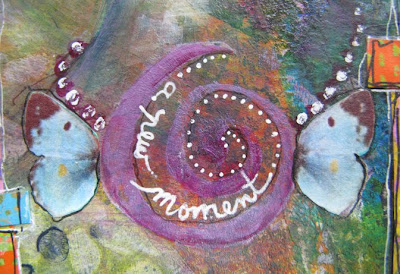 Deryn and I want so bad to start signing you up for the new class,
Of Towers and Turrets
An Exquisite Fusion of Mixed Media and Mixed Metals.
The fact is my husband's accident and Deryn's change in vacation plans just gave us a little delay.
We have great hopes of greeting you and welcoming you next week.
We have a fun little video ready to show and tell about the class as well as a very in depth description of what all the hoopla is about.
Looking forward to a great weekend and wish one for you too.
♥ Sharon
Posted by Sharon Tomlinson 19 comments: 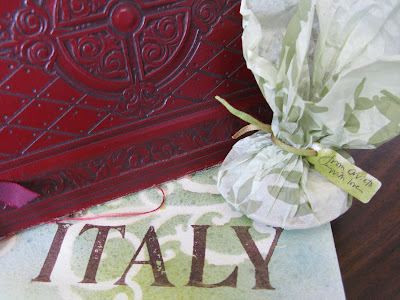 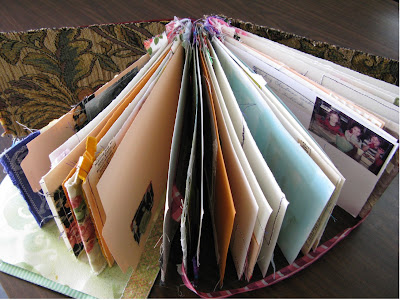 This morning on the way to the post office, a blackbird in flight crossed my path and the silliest thing popped into my head. I wondered if that meant I was in for good luck. You know like a black cat...bad luck. Oh well, it made sense to me.
Low and behold in the mailbox was a large ARTful envelope for me. It was the trip packet with the itinerary, travel guide, packing tips etc etc. Yep, I'm going. It is true. I did a little daydreaming about it here. Sometimes, you just have to make daydreams happen. I received my renewed passport yesterday and I am beside myself with excitement. I recommend taking action on daydreams if you can.
....and I have made a little destination/travel journal to take with me. I was so inspired by Deryn's journal. Well, it was the cover of her journal that mostly called to me because I knew exactly where a whole set of encyclopedias with the same exact covers were. My parents purchased a set in the 1940s when a door-to-door salesman encouraged them to be ready to educate their children. I have that set. Using the covers for my journal has already given me back so many memories of the past. Now I will be saving some future memories between the covers.
♥ Sharon

Email ThisBlogThis!Share to TwitterShare to FacebookShare to Pinterest
Labels: Italy, Me, Visual Journal

This morning I just needed to sling, fling, scrap, brush, stamp, wipe, and smoosh, PAINT!!! You know what I mean? Put it on, cover it up, wipe it off, put some more back on and on and on and on. I needed to do that. Whew!! I feel so much better. I made four backgrounds just like this.

Happy to have a restful Sunday to recover from another marathon two and half days with my friend Deryn. Yep, we are a whole lot closer to opening registration for our mixed media and mixed metals class. We are going to tell you all about it and show you all about it but the backgrounds above are a little peep at some of the mixed media in the class.
♥♥♥
On another front, my DH is doing much better from his boating accident. Actually, it was a preboating accident. The motor was running, he was about to get in and drive the boat off the trailer when he slipped and fell on the concrete ramp in the water. As he fell, he pushed the boat off the trailer and it was drifting in the lake with the motor running and he could not get up. Long story short, help came in the form of two good Samaritans who helped him fetch the boat, put it on the trailer and load him (literally) into his truck. He could drive because it was his left leg that was like a wet noodle and he was in no pain. I was on my way to meet him at the lake when it happened so he waited for me and then I followed him to the ER which was very conveniently only about 3 miles down the road. All is well, he will see an orthopedic surgeon Thursday to access whether or not he will need surgery to reattach muscle tissue.
Did I thank you for being out there even in my absence? Thank you!
♥ Sharon
Posted by Sharon Tomlinson 16 comments:

Email ThisBlogThis!Share to TwitterShare to FacebookShare to Pinterest
Labels: Me, Mixed Media Art, Of Towers and Turrets 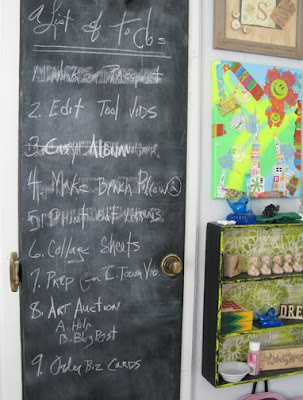 Little by little, I'm getting it done. And making progress on last weekends to-do list. Marked off several major things and took this pic before I replace those items with more major to-do things.

This kinda keeps me from stressing too much. I need to be able to mark something off a list somewhere and where better than my message center.

I still have some major thing to add to this list.

Thanks to all who sent me happy birthday wishes at Facebook. That was huge fun and I'm still celebrating with a three day weekend. I get to do that every year. 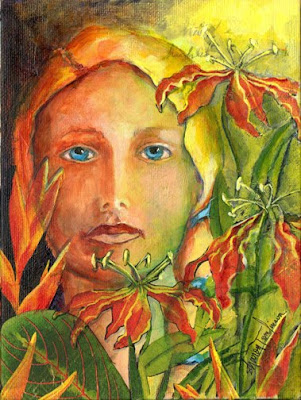 I wanted to share my third face from Faces in Technicolor. Can you guess what my color inspiration was for this face? All the videos are up now. Of course the class is still in progress and will be indefinitely. That means you can jump in anytime and won't miss a thing. You have the advantage of all the videos up for you from day one.

Please allow me to share a testimonial from one student:

"WOW...wow! Just watched the last class and can't thank you enough for being
such an awesome teacher. Your class combined the PERFECT balance between
visual demonstration and verbal instruction...with wonderful tips thrown
in! You really are amazing! I learned SO much!!!"

Well, what can I say, thank you and you have no idea how huge my smile is.