I have another sister story to share. Last Friday evening I received an Etsy conversation from a new virtual friend who wondered if I had a group of seven sisters. She said her "sister family" included her Grandmother, Mother, Aunt, Cousin, herself and two daughters and she would like to have five prints. She was OK with a group of five sisters as her two daughters are still very young. However, I felt sure we could include the two young daughters and sent her a message that I would work on the options that I could offer early Saturday morning. 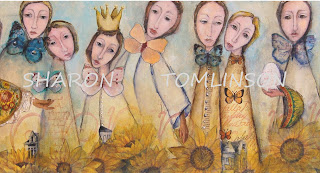 Since I have a large format printer, I offered two different size options. My new virtual friend told me she was partial to the Sisters Reunion painting and wanted the seven middle sisters. She explained that it perfectly portrayed her sister family and the two smallest sisters represented her twin daughters.

Well, it is another cool sister story the way someone came along who knew the real story. And I want to say that all of you represent my "sister family" and I so appreciate all of your support with comments. They warm me.

See you tomorrow with one more sister story. It's a good one......about me.....and a virtual sister.

Email ThisBlogThis!Share to TwitterShare to FacebookShare to Pinterest
Labels: Sisters