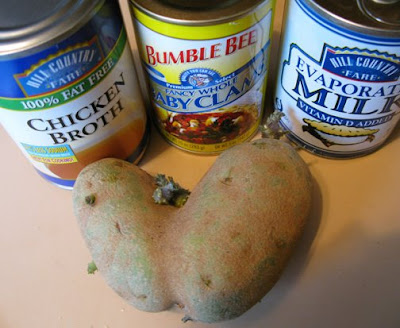 So, I don't go around looking for hearts. Sure I notice them but I'm not on the lookout for them. Really. Tonight we are having potato soup because we heart potato soup and it is raining and I just keep stuff on hand for such a soup when I haven't planned for any other thing. That would be tonight. I guess you couldn't say that I haven't planned because I'm planning it right now.

It is so delish that I thought I would share my concoction. Here is what I do:

I take a slab of sliced bacon and turn it on edge and slice through the slices about 1/4 inch apart and use about 2 inches off the slab of bacon. Are you confused? For me it is just the easiest way to dice some bacon for the pot. Throw the bacon in the pot on med heat. Dice 1/2 of a medium onion and throw into the pot of bacon cooking. Dice about 5 medium potatoes and throw them into the pot as you dice them. Each time you add a potato, stir the sizzling pot of bacon, onions, and potatoes. I like to cook the potatoes this way before adding the liquid. I think the potatoes absorb all the bacon and onion flavors. Add one can of chicken broth which is just enough to cover this amount of potatoes. I do not add water. Cover the pot and let them cook for 10 or 15 minutes until the potatoes are soft. Add one can of whole baby clams and one can of evaporated milk. Turn the heat down and then off as soon as the soup gets hot. Do not boil after adding the milk. Salt and pepper to taste.

And that's what were having.

Expect it to be delicious,

Email ThisBlogThis!Share to TwitterShare to FacebookShare to Pinterest
Labels: food