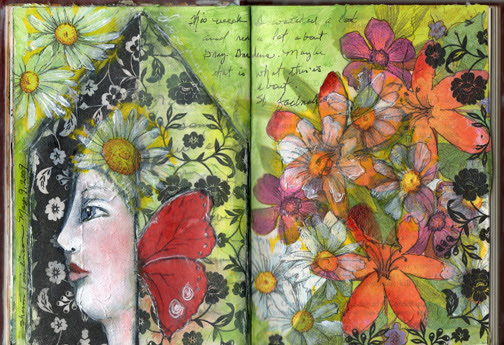 I haven't played in this journal in a while. I confess I started out doing a little napkin video for you; but, dang if I didn't do the first segment and then discovered that I was just talking to myself and the camera wasn't rolling. It's happened before. So anyway just imagine what I was saying. It would have been good because it was about layering napkins. That's all. I wasn't going to show you how to paint profiles because I just haven't managed that yet.

Now I have to go to my gardens to work. I promised. Myself.
Expect
Sharon

PS I realized when this was nearly finished that I had been influenced by something that has fascinated me this last week. Can you guess what?
Posted by Sharon Tomlinson