Getting close to bringing this tale to the current time.
But first I need to tell this. In January 1998, I emailed a friend with the latest news about  The Garden Palace. I told her about working on the stair wall because I was close to having the stairway ready to install. I'm so pleased that I thought to keep this documentation along with the photos because it included details that I surely may have forgotten by now.

For example, I told her about the creamy yellow paint I had chosen for the walls and that it had a very fitting name, Pollen. I told her I was using one coat of Kiltz first and then painting and that I was so anxious to have something pretty accomplished.

The most important information shared with her was regarding my research of the origination of this tiny house. As you know, in a small town everybody knows everybody. Because of this, I knew who the original owners were.

I talked with Bess (b.1910 d. 2011). Bess told me the First United Methodist church stood on that corner before the little house was built and her parents were the last couple to get married in the old Methodist Church. Her parents married in 1909.

Bess was so excited that I had rescued the little house. She said she noticed it was gone but thought it had finally fallen. The most interesting thing Bess told me, was from its beginning the little house was used as living quarters for the owners two sons, Dutch and Ed.

Bess married Dutch in 1934. She said there was never a bathroom or kitchen and the children took their meals in the boarding house. The house never had water but there was evidence that an electrical line had been installed through the front wall. Dutch tore down the boarding house about 1982 and he passed away the year before I purchased the tiny house in 1995. Oh how I would have loved to visit with him about it.

Here is more of what I did to it.
The tiny room became the stair room when I enlarged the attic opening and I designed and built this stair case.

In this photo notice the finished stenciled pansies.
I added a corner molding and painted the red stripe below the stencil area.
Pay no attention to the little non-stenciled area to the left of the stairs. (yep, that's one of the first things on my new daydream list) 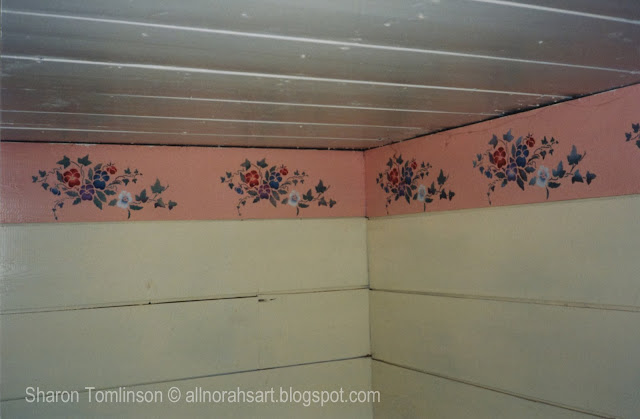 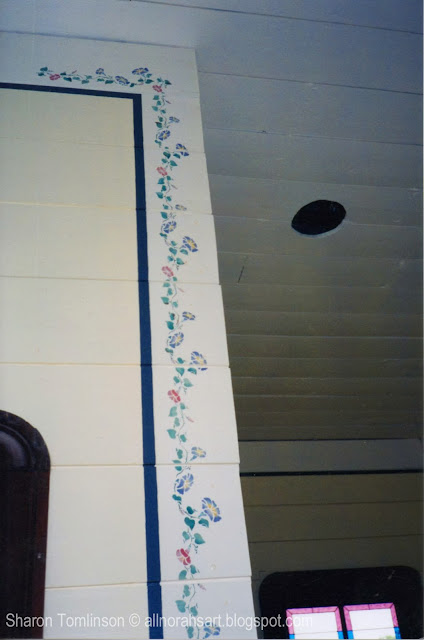 This was the beginning of the morning glory stencil. It started at the floor of this wall, goes up and all the way around the room and back down to the floor.
It is finished and a blue corner molding was added as well.
The green board that I added around the ceiling of the parlor was painted and stenciled before I installed it.

The parlor is the only room where I added molding under the stenciling.

Now, I want to tell you when I say "I", what I'm saying is I was the carpenter on the job.
I learned how to use a saw, hammer and nails from my Daddy when I went with him to his moonlighting jobs. However, the only thing I remember doing was puttying the nail holes.
Oh, and I do remember him telling me, "measure twice and cut once". A good thing to know.

I designed, cut, and installed the stairs, as well as all of the molding that I added with help from no one.

♥
All of the pictures I am sharing are from back then (1995-2001). This was before I had digital camera. Furthermore, it was long before blogging which could explain my lack of pictures.

The last batch of pictures that I have are coming tomorrow.
Outside views of what it looked like in 2001.
to be continued.....