The closest I ever came to d.i.v.o.r.c.e
was the day I shared my in-real-life daydream. It was easy enough to share as there it sat right behind the office in all it's splendor. Honestly, I don't even remember how long the fight went on. Nothing like it in what is now 51 years. We survived!

Truly, I didn't even realize how much this daydream meant to me. How deeply I wanted it.  I could not understand why NO ONE could see my dream.   To all the 'no ones' it was plain and simple absurdity. It was proof positive that she had once and for all become certified for the loony bin.

Have you ever ached in your heart, body and soul for something so much that you thought you might not survive? In my whole life the only thing that compares was the ache for my two precious adopted children.

In the end, "what about the money" question came up.  Until then,  I had never told him that I had stashed about $3500 away from my Mother's inheritance. I was waiting to spend it in some tangible way on something that I could celebrate her memory every day. My daydream was a huge creative project and I knew she would have loved it.

Even before the quarrel was settled, I pursued my daydream.  Immediately, the same day I drove through the proscenium opening on , I pranced across the street to the court house to confirm who owned it and what it was listed on the tax roll for.

Before our quarrel was settled, I walked down the street and visited the owner of my daydream. I knew him well. At first, he told me that many others had wanted my daydream and that it was not for sale.  The answer was no, you can't have your daydream.

I can not remember how much time lapsed while I was fretting inside and out. However, the need and the want only intensified. Eventually, the argument calmed mostly after I told him about my money source. He couldn't argue anymore.  But I don't think he ever believed I could make my daydream come true. I do think he thought I would remain in the fantasyland.

You know I believe nothing ever happens before it is time. Well, while I was fretting inside and out, the City decided to get tough with the property owners and city ordinances regarding abandoned vehicles and structures.

Knowing this,  one day I went back down the street to visit the friend who owned my daydream.  First he told me that he had 30 days to do something about the property or face a daily fine by the city. Then, he told me I could have it because it would save him paying some one to tear it down. I told him I could not do that. He ask how much did I want to pay.  I told him $100.00.  We shook hands. I left but returned with my check as fast as I could.  We closed the deal. I owned my daydream.

Next up, I had to contact a house mover.  There was a well known one in the area and  I set an appointment for him to come to my office so I could show him the daydream.  I had questions about can he do it? Would he do it? When can he do it? How much will it cost? etc etc

Oddly, with every question, he would say, "I want to see  The Man back there" or "I need to talk to The Man in the back office".  I ignored him several times while I was trying to understand why he thought he needed to see the man back there.  Finally, I realize that he had never done such business with a women. I gently explained that if he wanted the job, he would in fact have to talk to me because The Man back there did not want to have anything to do with my daydream.

We made a deal. $2000.00 to move my $100.00 shack that sat across the street from the county courthouse to our country property that was two miles outside the city limits.

We had to wait for weather and of course I was in line behind others who had daydreams to be moved.

The day finally came. This is what it looked like. 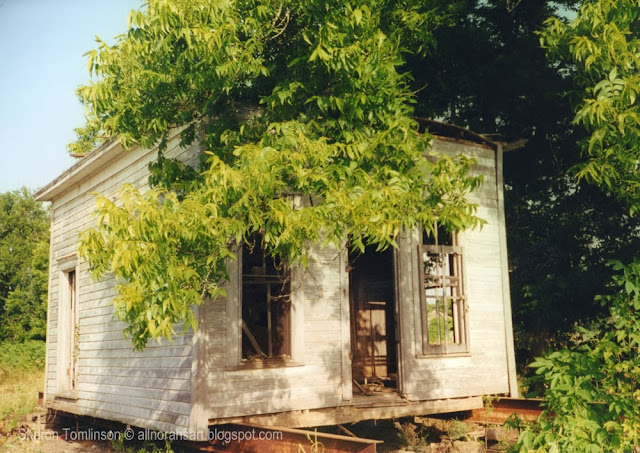 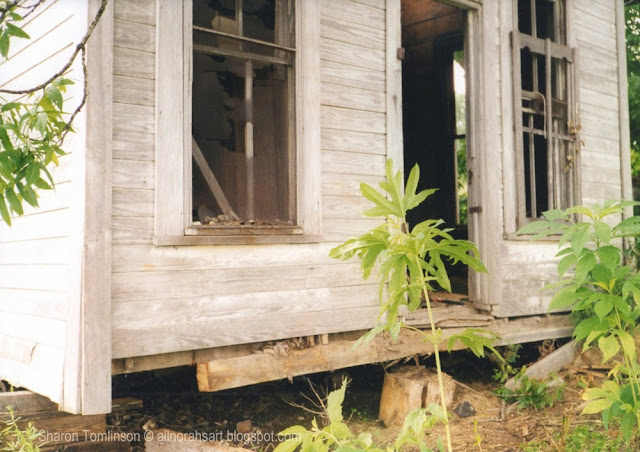 Preparation for the move 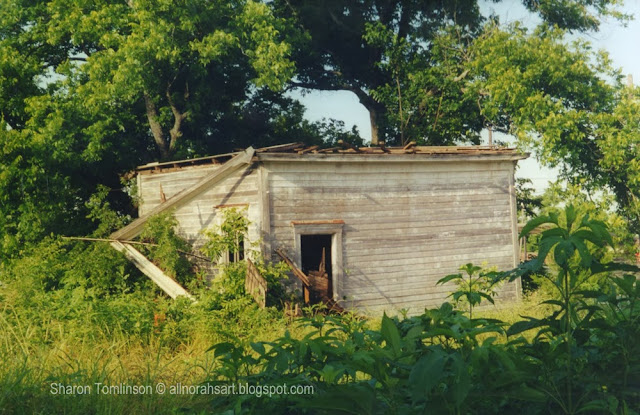 It broke my heart that the roof had to be torn off due to the height of my daydream.
It was in poor condition but seeing it this way crushed me. 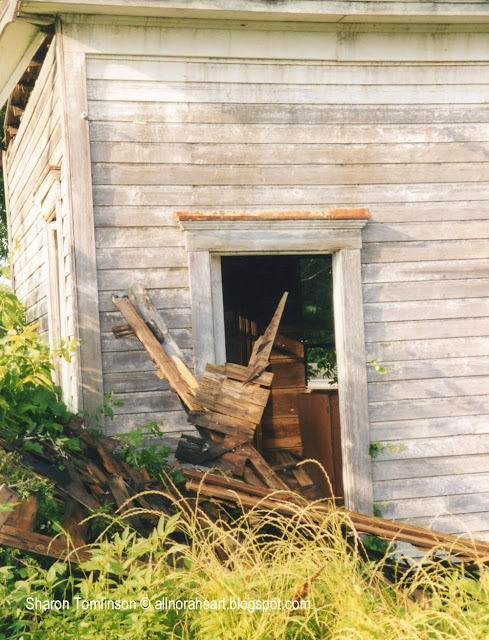 All of the old roof material was put inside for the move. 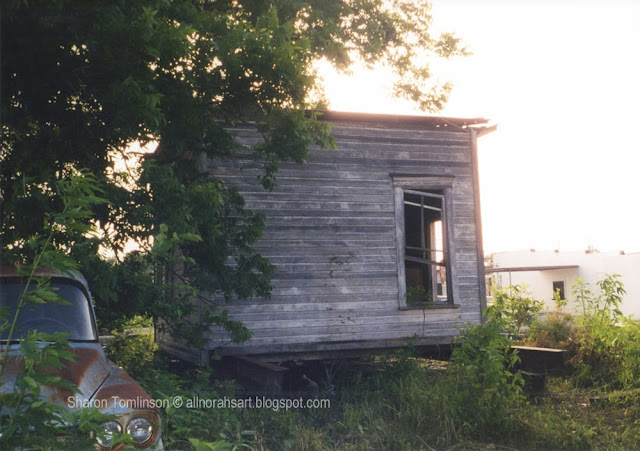 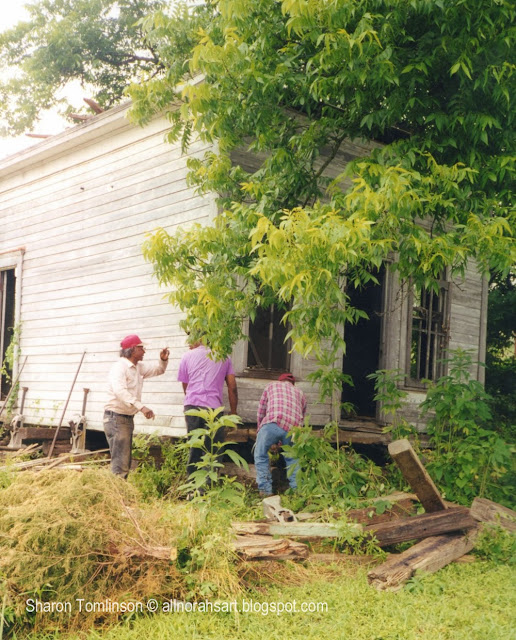 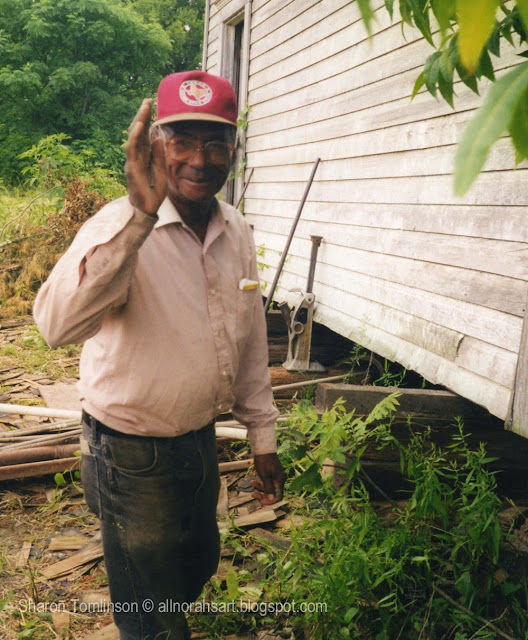 This is my moving man who thought he needed to see The Man back there.
Ever after this tale was told, certain people who called the office for my dear husband ask for The Man.

On moving day as the truck pulled out, I was right behind it with my movie camera. Unfortunately, that was in 1996 using a camera that recorded on VHS tape.

I took almost 4 hours to move my daydream from town to the country. It took me eight minutes to make the trip every day.